Jula’s seven small warehouses around Skara were pooled into one, 40,000 square metres large, central warehouse by the E20 in Skara. The central warehouse gave Jula the opportunity to develop expansive low price retailing by purchasing large volumes, and through efficient logistics solutions to supply the department stores with products.

We have a lot of warehouses around Skara, including our old warehouse on Björkelundsgatan. The warehouse I built at Gjutaren filled up quite quickly. Skara municipality was sympathetic, they acquired and planned all of the extensive land that neighboured Gjutaren, and after negotiations we purchased a large part of this land with the option of even more. The logistics manager Lennart Karlsson and I carefully planned a new warehouse after several field trips. With all my experience over the years of building a lot of warehouses that were far too small, I decided to go for it this time.

The first phase was built in 2004, both a lot higher and bigger than we had done before, I really did it this time. After tough negotiations and a good price, Midroc/Peab received the assignment to start building. It was a very big investment for Jula, but important, and the bank was involved. With the benefit of experience we now built in geothermal heating/cooling, sensors and entresol over loading bays, extra large auditoriums, service offices, and service and truck workshops etc. We pooled together all our warehouses and the logistics became much more effective.

We sold our old central warehouse that had been built in several stages in excellent cooperation with the municipality to Grönlunds Plåt. We are now very expansive and I open a lot of stores every year. The warehouse soon filled up and we built out in new stages, because in this period there was a powerful expansion. It was a rational choice and easy to just extend the first part of the warehouse in the same way, even with the entresol that we had in reserve. The warehouse is now about 150,000 square metres. 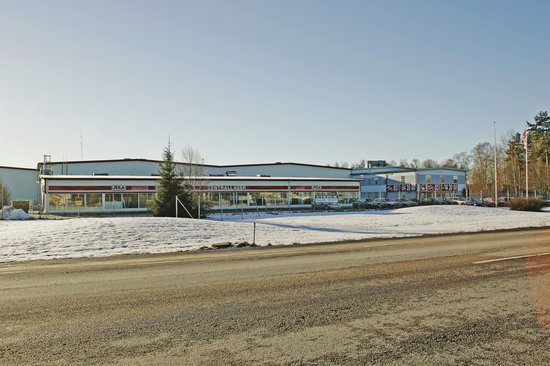